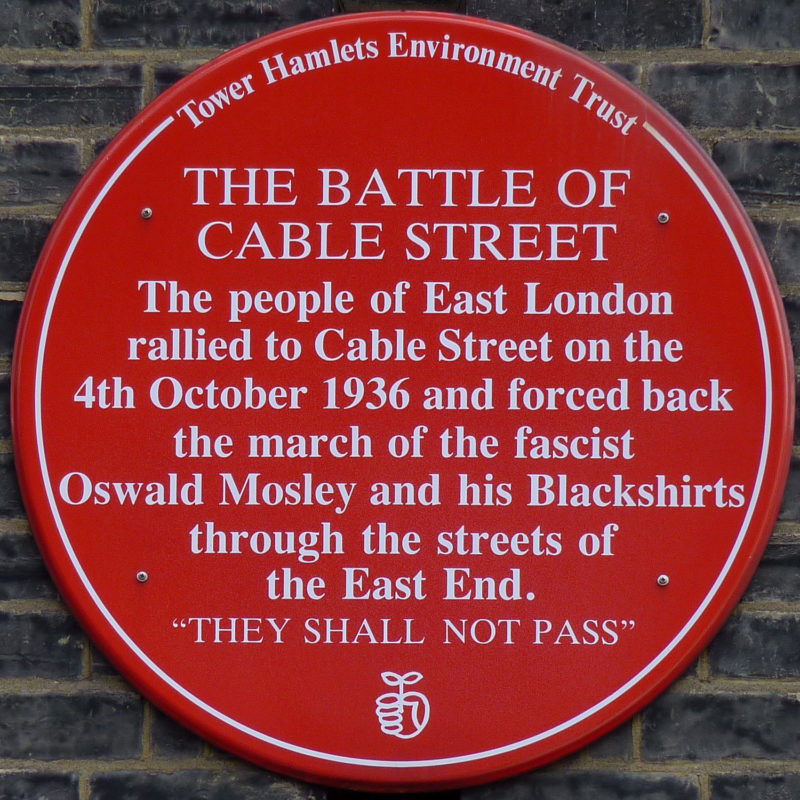 In an event that became known as the Battle of Cable Street, people from across the East End of London united in their efforts to stop the British Union of Fascists (BUF) marching into Tower Hamlets.

Locals identifying as Jewish, Irish, socialist, trade unionist, communist and anarchist joined forces and completely blockaded Gardiners Corner at Aldgate – the gateway to the East End. Several tram drivers, sympathetic to the anti-fascist cause, abandoned their vehicles to help the protesters block the fascists’ planned route, which would have taken them through the most heavily populated Jewish streets of the East End to four open air meetings in Shoreditch, Bethnal Green, Bow and Limehouse

Mounted police armed with elongated truncheons were used to beat back the massing crowd, but thousands more protesters kept arriving. Chants of ‘Down with the fascists!’ and ‘They shall not pass!’ rang through the streets. Eventually the police sought to clear a path further south, through Cable Street directly opposite Royal Mint Street where thousands of fascists had assembled.

Upon entering Cable Street the police were met with fierce resistance. As they tried to remove barricades erected by the protesters to block the BUF’s path, brawls broke out, whilst rotten fruit, kitchen implements, bottles and the contents of chamber pots were thrown from windows. Many Irish people from the far end of Cable Street came to help their Jewish neighbours build and defend the barricades. Eventually, the police withdrew and informed the BUF’s leader Oswald Mosley that he would not be able to march through the East End that day. He was ordered to turn his troops around, march in the opposite direction, then disperse. Anti-fascists then held a victory parade.

During the Battle of Cable Street, 79 anti-fascist protestors were arrested. Most were fined but a small number were sentenced to three months hard labour. Just five fascists were arrested.

To commemorate the battle, a mural was commissioned in 1976. The mural exists today and has an interesting history which illustrates some of the continuing issues facing the East End of London.

Artist Dave Binnington designed and began painting the huge mural in 1979, aiming to finish the next year. The project took much longer than Binnington expected – he was still working on the project in 1982 when the unfinished work was vandalised with right wing slogans. Disgusted, Binnington abandonded the project.

Three artists – Paul Butler, Desmond Rochfort and Ray Walker took over the project and the mural was completed in 1983. It was restored in 2011. It is a well-known landmark in the area and a source of pride for anti-fascist campaigners. For some, however, the mural is not uncomplicated.