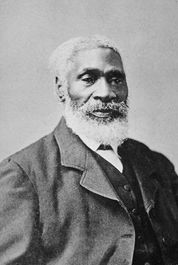 This is the story of an unlikely friendship between two men, Josiah Henson and Samuel Morley. One was born into enslavement in America and the other into a wealthy middle-class home in London, yet they became united in their fight for justice.

One of Josiah Henson’s first memories was of his father having his right ear cut off and receiving one hundred lashes on his back as a punishment for striking a white man who had brutally assaulted his wife. After being separated from his family and suffering countless beatings, Josiah escaped with his wife and children. They travelled through woods and crossed rivers, relying on good Samaritans to help them along the way in what would become known as the Underground Railroad. They eventually arrived in Canada in 1830.

Not content to settle down and enjoy life as a free man, Josiah returned to the US to help another 118 enslaved people to their freedom. He set up a refuge for escaping slaves and travelled the world preaching for the abolition of slavery.

During his tour of Britain in the 1870s, Josiah met Queen Victoria and travelled to Nottingham where he delivered lectures on the brutality of enslavement. Josiah was a powerful orator, exposing that brutality to the audience and shocking them by showing the scars on his back from whipping.

In Britain he met Samuel Morley and the pair formed a friendship that would last a lifetime. Samuel was the Liberal MP for Nottingham. He was also an ardent abolitionist, social reformer, generous philanthropist, political radical and champion of fair working conditions: he introduced pensions for his employees long before they became compulsory.

The two friends were united by their common desire to fight injustice. Josiah stayed with Samuel in London and Nottingham, and Samuel funded both Josiah’s Dawn Settlement – a refuge and school for escaped enslaved people in Canada – and his autobiography detailing his experience of enslavement and escaping on the Underground Railroad. The autobiography is believed to have been the inspiration behind Uncle Tom’s Cabin, a hugely popular abolitionist novel that exposed the extreme suffering of enslavement and turned Josiah into a trans-Atlantic celebrity.

While Josiah and Samuel’s efforts could never be enough to change deeply engrained racism, through their publications and preaching they confronted and shocked Britons with the horror of enslavement and left a lasting impact on discussions around race in the UK.