Don’t miss the film and audio clips of powerful voices from the US civil rights movement:

In June 1996, a branch of the Ku Klux Klan held a rally in Ann Arbor, Michigan, USA. 18-year old Keshia Thomas joined the protest against them.

When protesters began attacking someone they suspected of being a Klansman – he had a Nazi ‘SS’ tattoo – Keshia shielded him and shouted for the attackers to stop. A few months later, Keshia was thanked by the son of the unnamed man she had protected.

There are many examples of people like Keshia who stand up for what they believe – you might be one of them. This exhibition aims to inspire and empower people to take action for social justice.

We have chosen just some of the many untold stories from ordinary people who contributed to the US civil rights movement of the 1950s and 60s, in the hope that their stories will move you to keep fighting for the causes you care about.

If you met Keisha, what would you ask her? What are your responses to this photograph? What might you have done in her place?

How can you take action for change?

Now that you have read Keisha’s story, how do you think you might be able to action change, no matter how small the act?

They were asked to leave but refused, sitting at the counter until the shop closed. This was not the first sit-in but their protest inspired other sit-ins and boycotts across the country. They had wide media coverage and owners of segregated stores were forced to abandon their policy. 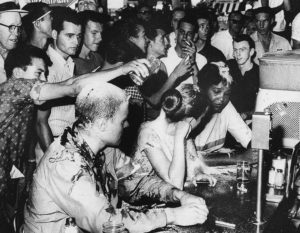 A violent attack on a sit-in in Jackson, Mississippi. “I was attacked with fists, brass knuckles and the broken portions of glass sugar containers, and was burned with cigarettes. I’m covered with blood and we were all covered by salt, sugar, mustard, and various other things.” – Hunter Gray ©Alamy in perpetuity

‘For some people it became a philosophy…a way of life…When we would go down to sit-in..It was like going to church I guess. You would put on your church-going best Sunday clothes, and we took books and papers and did our homework at the lunch counter, just quiet and trying to be as dignified as possible. ..I drew up some rules: Don’t talk back. Sit straight. Don’t laugh out. Don’t curse. Remember the teachings of Jesus, Gandhi, Martin Luther King. God bless you all…The individual who probably had the most influence on us was Gandhi.’

– John Lewis quoted in My Soul is Rested: Movement Days in the Deep South Remembered by Howell Raines

Tell us who inspires you 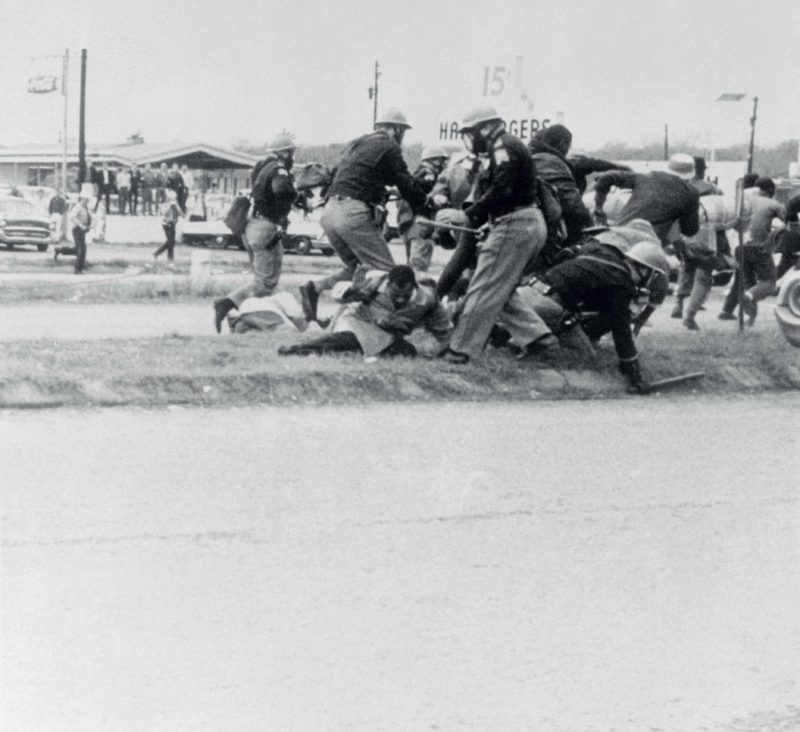 Why do you think voting is or is not important?

On 7 March 1965, Martin Luther King and other civil rights leaders marched with local African Americans to protest race discrimination in voter registration and fight for their constitutional right to vote. They planned to walk 54 miles from Selma to Montgomery, Alabama but were stopped when state troopers, under the governor’s orders, launched a brutal attack using tear gas and clubs. Film footage and photographs of the violence were shown around the world, shocking viewers.

On 21 March, after President Lyndon Johnson had promised the protestors army protection, activists and civil rights leaders marched again, this time joined by people of every creed and colour from all over the US. The marchers and the vast support they gathered led to the passing of the Voting Rights Act of 1965 – a milestone of the civil rights movement which made racial discrimination in voting illegal.

Tell us what you think about voting 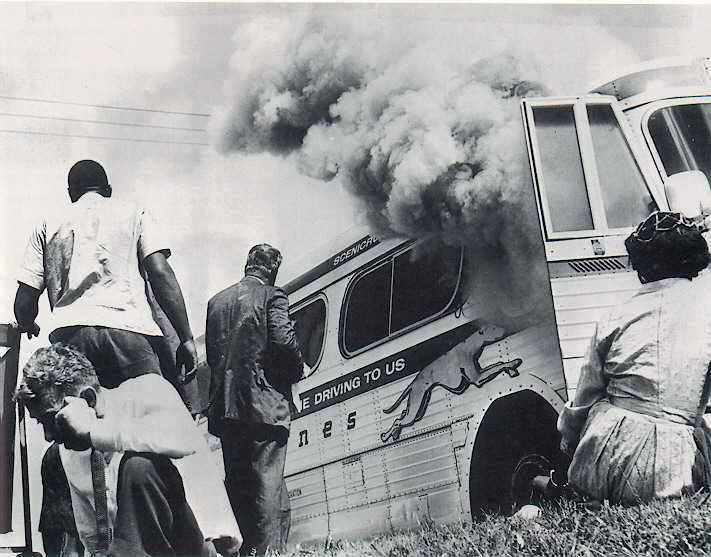 Photograph taken by “Little Joe” Postiglione, who bravely documented this moment amidst the violence, so changing the civil rights movement for the better. Courtesy of David Fankhauser

Has an event on the news ever caused you to take action?

The Freedom Riders were civil rights activists who challenged segregation on public transport in the south by taking buses filled with black and white riders into states where segregation of transport facilities was enforced.

In 1961 in Anniston, Alabama, a white mob awaited the arrival of the first bus bearing the Freedom Riders at the Greyhound station. They attacked it with iron pipes and baseball bats, slashed the tyres, and then firebombed the bus as it pulled off the road. As riders escaped the bus, attackers beat them and the bus was destroyed by flames.

Tell us about taking action

The ‘Greensboro Four’ – participants in the 1960 lunch counter sit-in – are shown on the street after leaving the Greensboro, North Carolina Woolworth’s by a side exit. (L-R): David Richmond, Franklin McCain, Ezell Blair, Jr., and Joseph McNeil. Photo: Jack Moebes/Corbis

Have you ever been wrongly stereotyped? How?

During the sit-in, McCain, one of the protestors, noticed an older white woman sitting at the lunch counter a few stools down. He assumed she was disapproving. When she finished her doughnut and coffee, she walked behind McNeil and McCain, put her hands on their shoulders and said in a very calm voice, ‘Boys, I am so proud of you. I only regret that you didn’t do this 10 years ago.’

‘What I learned from that little incident,’ McCain recalls, ‘was … don’t you ever, ever stereotype anybody in this life until you at least experience them and have the opportunity to talk to them.’

Tell us what being stereotyped means to you 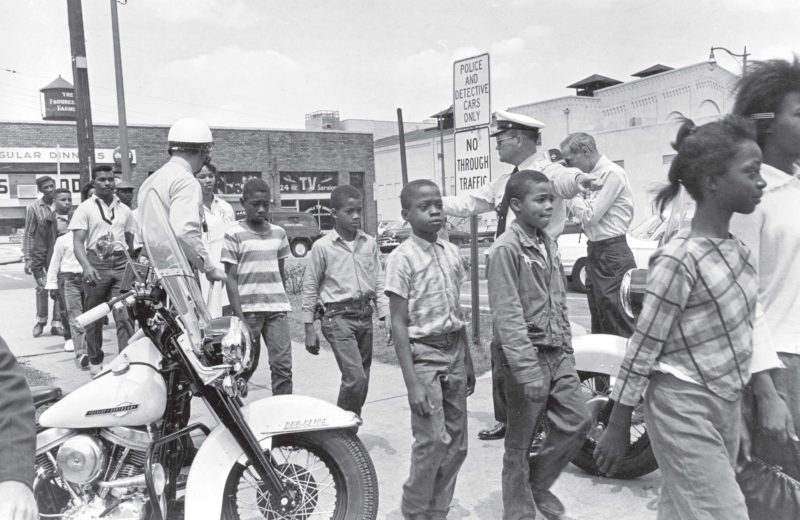 Do you agree with Malcolm X or the Rev James Bevel?

Birmingham, Alabama, was the most segregated city in the US. The Birmingham Children’s Crusade, organised by the Rev James Bevell, was a non-violent demonstration by hundreds of school children in May 1963 that called for a meeting with the mayor to discuss desegregation. The head of police, ‘Bull’ Connor, ordered his men to use fire hoses and dogs to prevent the children marching and authorised their arrest. The media images caused outrage and led President John Kennedy to give his public support to racial equality. The impact of the march helped lead to the 1964 Civil Rights Act. Malcolm X opposed the event because he thought it might expose the children to violence. He said,

“Real men don’t put their children on the firing line.”

Tell us who you agree with