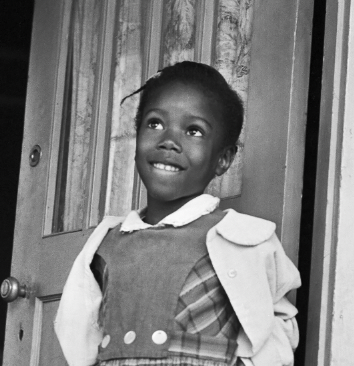 Ruby Bridges was just six years old and starting school when she made history in 1960. She was the first African American child to be given a place at an all-white elementary school as part of desegregation in the southern states.

Taking her place at school caused such hatred and hostility from the local white community that, for the whole of Ruby’s first year, she had to be escorted by four armed US federal marshals when entering and leaving the school.

Barbara Henry, a young teacher who had recently moved to New Orleans from Boston, was the only member of staff willing to teach Ruby as part of an integrated class. However, in protest against Ruby’s presence, all but three white families removed their children from the school. By the end of Ruby’s first week, she was the only child in class. Neither Mrs. Henry nor Ruby missed a day of school that year – they knew it was important to keep going.

The Ruby Bridges Foundation was inspired by Ruby’s desire to help all children achieve their hopes and dreams.

When you see me, what do you see?

Am I a creature because I’m black?

Am I different to white people?

You make ridiculous owl sounds as I pass,

You can compare me to the craving chimpanzee.

But I will release the fire inside of me, and suffocate your soul…
Meet the Lioness who’ll silence the noise.
I will bury you and your ghastly words.

When you’re hot you’re red,
When you’re sick and purple
You’ll die grey and feeble.
Yet you call me coloured?
Black. The other.

Because I’m black, does that make me a criminal!
Why do you fear me? Why is my face a disgrace?
Why do you keep scratching my skin?

What are these pigeonholes?
I’m Mexican so I’m a rapist,
White I’m butter perfect!
Ugly so I live in poverty?
Weird so send me to a mental asylum?

This will make you cry

Trinity Bibbon was a student at George Mitchell High School, Leyton, east London. She wrote, “This poem was inspired by the Ruby Bridges story. Racism still exists in our schools and we need to help one another understand different cultures and religions.”